Ever since I tried the roasted bell pepper soup from Trader Joe's (a grocery store here is US) few years back, I had instantly fallen in love with the flavor and the simplicity of the soup. Believe it or not my first experience of this soup was right out of a tetra pak carton 😛. Its quite amazing how just the roasting procedure gives such a boost of flavor to the the peppers and the soup.

So today I will be sharing my version of roasted red bell pepper soup. The first time I made this soup I had included tomatoes as well but somehow I didn't like the addition of tomatoes or I think I may have added a little too much tomatoes as compared to red bell peppers.  So this time around I made the soup only with red bell peppers and skipped the tomatoes and kept it very simple using very few ingredients. I also have not added any kind of cream in this soup. The end product in itself is so creamy that you will not need cream at all. This soup is perfect for this weather with the warm smoky taste of the red bell peppers and its beautiful creamy texture. Top it off with any of your favorite soup toppings or with some garlic croutons. 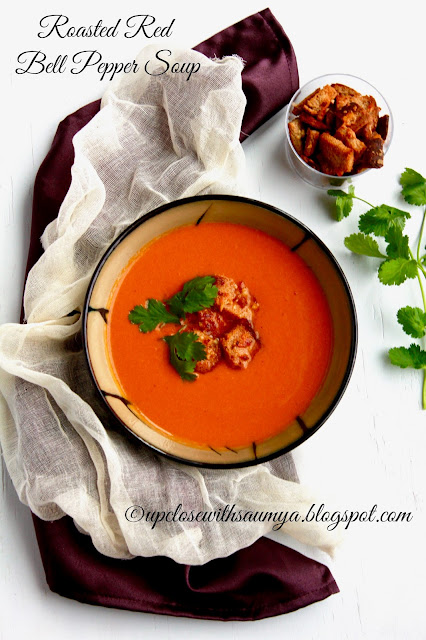 This is a small recipe and serves 2 -3 people.

For variation in flavor you can also use fresh thyme, bay leaf and or basil.

You can also roast the peppers on a grill if you have one. 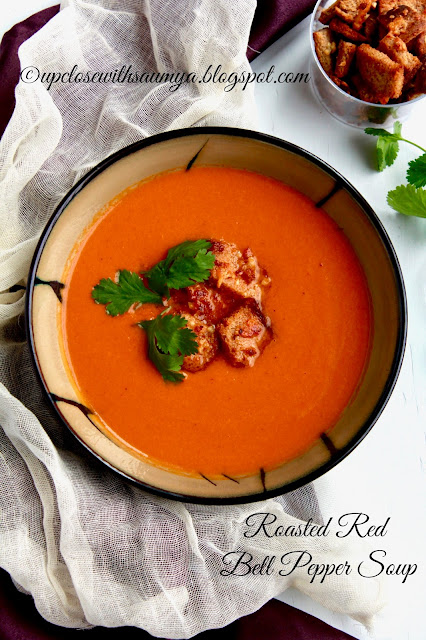 So far I have tried the first two methods, stove top and in the oven. Personally I think it is much more easy and less time consuming when they are roasted in the oven.

1) Pre heat the oven to 500F (260C). Wash and wipe the bell peppers. Coat them with little oil and put them on a baking sheet (I did not cut them) and place the baking sheet on second from the top rack of the oven. Set the timer to 30-35 mins and remember to keep turning the bell peppers every 10mins with the help of tongs so that they are roasted evenly.

2) Once they are nicely roasted remove them from the baking sheet and place them in bowl and cover the bowl with a cling wrap or lid and let it rest for 10 - 15mins or until they are warm enough to handle. This process will help to peel of the skin of the peppers very easily.

3) After 15mins or so remove the peppers from the bowl. Cut them in half deseed and remove the core. And then start to peel off the skin. Repeat this procedure with the remaining two peppers.

4) Once all the peppers are cut, deseeded, cored and peeled, roughly chop them and keep them aside. Also do not throw away the liquid that oozes out during this process.

5) In a stock pot or a heavy bottomed pot heat up oil. I used my everyday cooking oil but you can also use olive oil or even butter. Once hot add the minced garlic and cook it on a low to medium flame for few seconds. Now add the onions and saute them for a min. Now add the chopped carrots. Cook until the onions are translucent.

6) Add the smoked paprika and chili powder and saute for few mins. Now add the chopped cilantro and saute. Finally add the roasted red bell peppers with its juice and saute for a min or two. Add salt and pepper to taste.

7) Finally add the chicken stock or vegetable stock. Let it simmer on a low to medium flame for about 15 mins. Check for seasoning. Add more salt and pepper if required. Switch off the flame and remove the pot from the stove.

You have to be very careful while blending. DO NOT fill the blender more than half else your soup will be over the kitchen. Use a kitchen towel to hold the blender and the lid to save your hands from the steam. Also here is a tip, initially give it a few pulses then open the lid and let the steam out. This way there will be less vacuum created because of the steam. Do this a couple of times and then go ahead  and blend the soup until it looks smooth and creamy. Remember to blend the soup in small batches.

9) Transfer the soup again to the pot and reheat as required. Check again for seasoning.

Serve hot with you favorite soup toppings or simply with some croutons. I quickly made some homemade croutons with some left over multigrain bread by using some butter, minced garlic and grated parmesan. 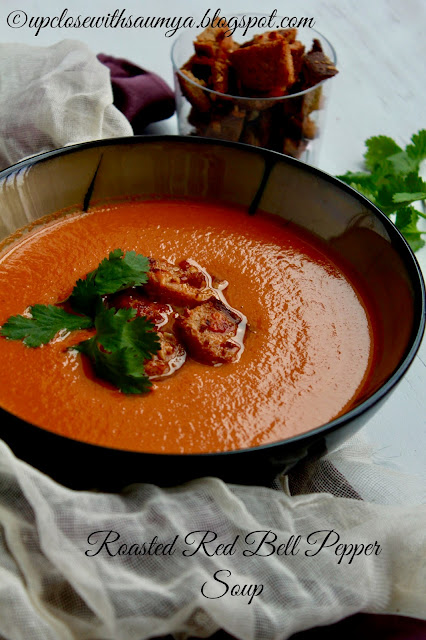