And down south we indeed have breakfast like a king. :D

South india and my native Kerala offers a variety of delicious dishes when it comes to breakfast. I remember having different breakfast every morning at home. Right from Idli sambhar, dosa chutney, utthapam, medu vada sambhar, puttu kadla, iddi appam, kappa, just to name a few. These were generally prepared on weekdays at our home while breakfast for Sunday's always used to be special. I am sure many of you must be familiar with the typical dosa, masala dosa and idli. But there are very few people who have actually tried other authentic south indian breakfast dishes like puttu kadla, iddiappam and even appam & stew.  Ever since my childhood days Sunday's special breakfast most of the time used to be appam and potato stew. The first time when i made it here in US, it was nostalgia all over and i was immediately transported to my home in India. Since then, i make it a point to prepare this dish every Sunday. I have been meaning to post this recipe like forever. Finally here it is. 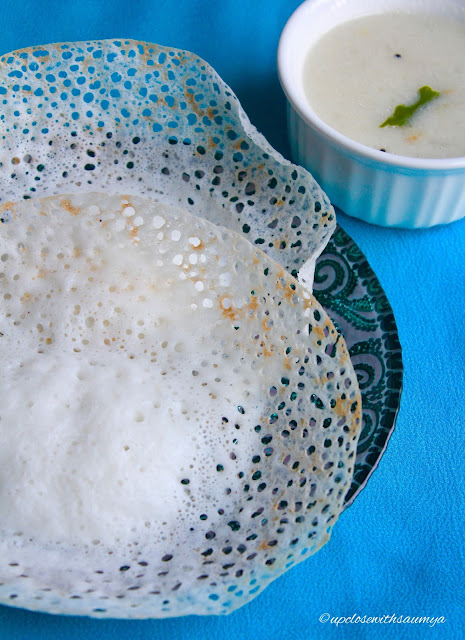 Appam is a kind of a pancake made with rice and coconut, fermented overnight with yeast and served with delicious potato stew which is flavored with coconut milk. I recently served appam and stew to on of our north indian guest's and he was quick to point out that appam is nothing but idli in the centre surrounded by dosa :P. Hahaha. Yea thats how it looks like but it tastes nothing similar to an idli or a dosa. The combination of rice, coconut and yeast yields an appam with a centre which is soft and fluffy with crispy edges. The yeast and the coconut gives a lovely taste and aroma to the appam. Appam is usually accompanied with a variety of non veg dishes as well like fish curry, chicken and beef curry. It is made in a special cast iron pan called appachatti. However the non stick varieties are nowadays easily available in the market. In this post i will be sharing the recipe for both appam as well as the potato stew served along with it.

Recipe courtesy: Mommy dearest :D
Ingredients for Appam:
1 cup surti kolam rice/sona masoori rice
1/2 cup of freshly grated coconut
1/3 cup of cooked rice (Please read the note towards the end of the recipe if you don't have cooked rice)
1/4 cup of water
1/2 tsp of dry active yeast (i used Fleischmann's)
1 1/2 tsp of sugar
More water as needed for preparing the batter
Salt and sugar for taste

2) Next step is to prepare the batter. Drain the water in which the rice was soaked. Put the rice in a blender/mixer bowl. Add around a cup of water and start to grind the rice. Grind it for a few mins. Now add the grated coconut, cooked rice and around 1/3 cup of water. Grind the mixture for a good 3 - 4 mins.

3) Check the consistency of the batter. It shouldn't be too thick. If you feel its too thick keep on adding little water and grind.

4) The final batter should be fairly thin (but not too thin also). Transfer the batter in a large bowl. Set this aside.

5) In a small saucepan add 1/4 cup of water and sugar. Heat the water on stove until the sugar is dissolved. Remove the pan and set it aside. At this point of time the water will be hot. You want it to be warm to touch before adding the yeast.

6) Check the temperature of the water. I simply do it by touching it. If its warm to touch then its ready for the yeast. Add the yeast and set it aside. After about 5 mins the yeast will foam up. Stir it with a spoon. (Do not add the yeast when its too hot this will kill the yeast).

7) Now add this yeast mixture into the batter. Mix thoroughly and let it ferment overnight.

8) In the morning, add salt to taste and around 1 tsp of sugar and mix well.

9) Heat your appam pan (apply a little oil with a paper towel if desired). I have a non stick pan and i usually don't apply oil and that works fine for me. With a ladle spoon out a little batter and pour it in the centre. Now hold the pan with both your hands and roll it in such a way that the batter in the middle spreads to the sides and forms a round shape pancake. (As pictured below).

10) Cover the pan wit a lid and let it cook for 3- 4 mins or until the centre of the appam is cooked and edges are crisp. 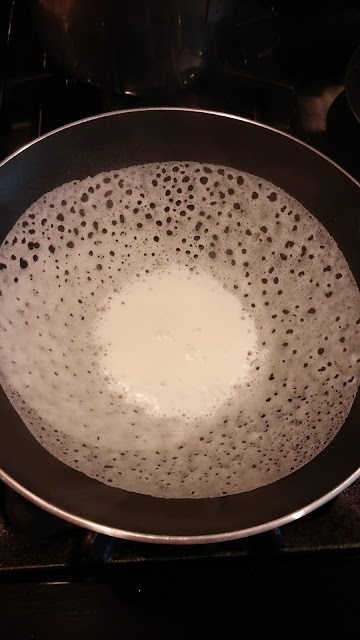 This is how my appam pan or appachatti looks. Its from the company prestige. 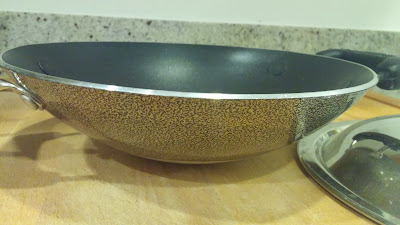 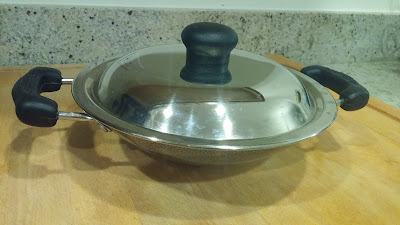 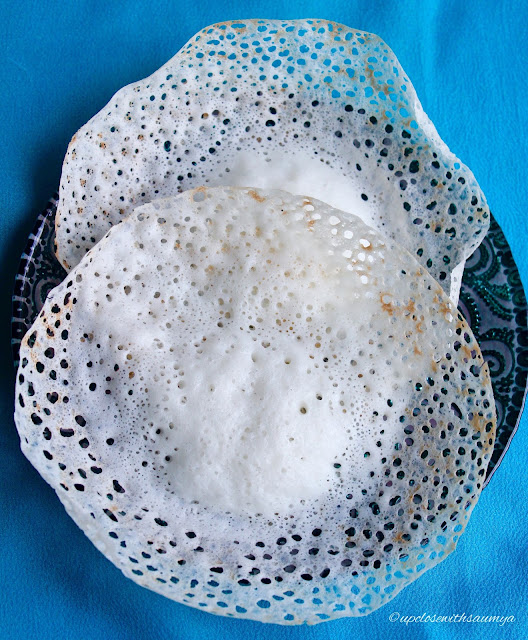 Note: Most of the time i don't have any cooked rice around. So the actual practice is that initially when you grind the rice with water (without the coconut), remove a little batter (around 1/4 cup or so) in a separate bowl or saucepan. To this add around 1/2 cup of water. Cook this mixture on a low flame until it thickens. Let it cool down to room temperature and add it to the prepared ground batter (which is the rice and the coconut) towards the end along with the yeast mixture and mix very thoroughly until the mixture is well incorporated with the batter.

1) Peel and chop the potatoes and onions. Just roughly chop them into big cubes.

2) Add the potatoes, onion, green chili and salt in a pressure cooker. Add around 1 to 11/2 cups of water. Close it with the lid and let it cook until the cooker gives out 4 - 5 whistles. You can also cook the potatoes and onion in a pot until they are completely cooked through and tender.

3) While the potatoes and onion are cooking prepare the coconut milk. Add the grated coconut in a mixer bowl/blender. Add around 1/3 cup of water. Give it a few pulses. Squeeze the mixture with you hand. Strain it. This is first batch of coconut milk which will be a quite thick and creamy. Now to the squeezed coconut add more water around 3/4 cup, blend again, squeeze. This will give you very light and watery second batch of coconut milk. Keep them aside.

3) Mash the potatoes with a potato masher. Do not mash it completely leave few chunks of potatoes as is. Now add the second batch of milk and let it cook for few mins until it is a little thick in consistency. It should not be too thick also. Check the seasoning. Add more salt if required. Once it reaches the desired consistency, switch of the gas. And then add the first batch of milk. Do not cook the stew after the addition of first batch of milk. Else it will cause the milk to separate and the stew will loose it creamy consistency.

4) Now the final step is tempering the stew. Add around 1/2 tbsp of coconut oil in a small pan. To that add mustard seeds. Let them splutter. Now add the chopped sambar onions (optional) and the curry leaves. Stir for few secs. Now add this tempering to the stew. Thats it potato stew is ready to be served with appams :D

You can also make masala stew by adding turmeric powder, chili powder and a little coriander powder to the tempering. Cook it till the raw smell of the masala goes away and pour it in the stew. 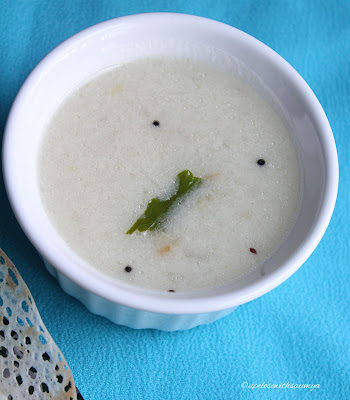 Happened to click this today morning before gobbling them down. 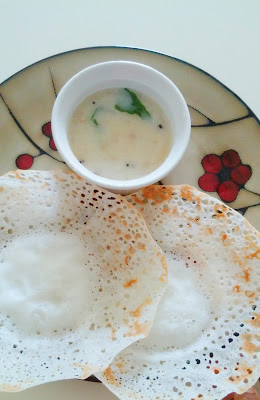 Give it try and let me know how it turned out. Please do not hesitate to leave any comments and questions, i will be more than happy to answer all the queries.