This is the first time ever that i have attempted making an ice cream at home and that too without an ice cream maker. I only went ahead with it as i had some leftover heavy cream and somehow i could not think of making anything else. Also this is an eggless recipe. I do eat eggs its just that i was feeling extra adventurous to try something new. With no ice cream maker at home i just didnt want to mix stuff and freeze it. I really wanted the end product to be as smooth as store bought ice cream.

And so, i searched and searched the internet and zeroed down on the ice bath method. This method basically replicates the mechanism of an ice cream maker. The basic idea of this method is to breakdown the ice crystals that are formed when you freeze the mixture. Although the end product was not very smooth but it definitely was very very close. And the recipe is something i came up with. It is indeed a keeper.

As far the picture goes you might be thinking why just one scoop of ice cream rather than 2 or 3? Yaaaa soooo there is a reason behind that. The ice cream came out so good that me & hubby gobbled down almost the entire bowl. Finally when i thought about clicking some pictures only one scoop was left. :D. This is a small recipe so please double the ingredients if you want to make a good size batch. 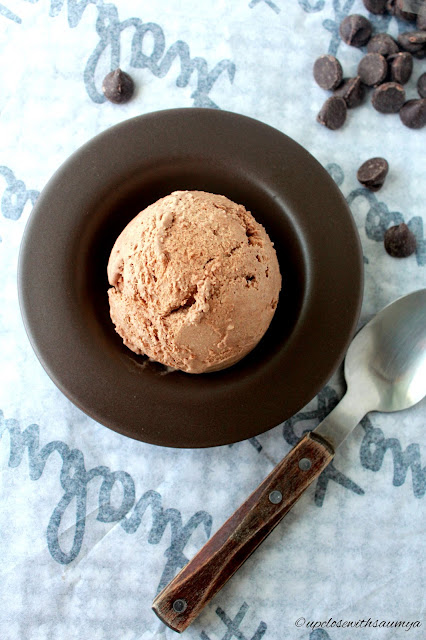 Ingredients:
1/4 cup of granulated sugar
2 tbsp of unsweetened cocoa powder
1/2 cup of milk
1 cup of heavy whipping cream
2 tsp of strong brewed coffee ( i used store bought coffee concentrate by trader joes). This is optional but highly recommended as the coffee brings out the flavor of chocolate and makes it more chocolaty. If you don't have one then go ahead and use 1 tsp of vanilla extract instead.
1/4 cup of chocolate chips melted and cooled at room temperature.

1) Melt the chocolate chips in a double boiler, cool it and keep it aside.

2) In a separate saucepan add the sugar, milk, heavy whipping cream and cocoa powder. Mix it and switch off the gas once it starts to boil. At this point the sugar will be melted and the cocoa powder will be nicely combined with the milk. (Please refer the pictures below). 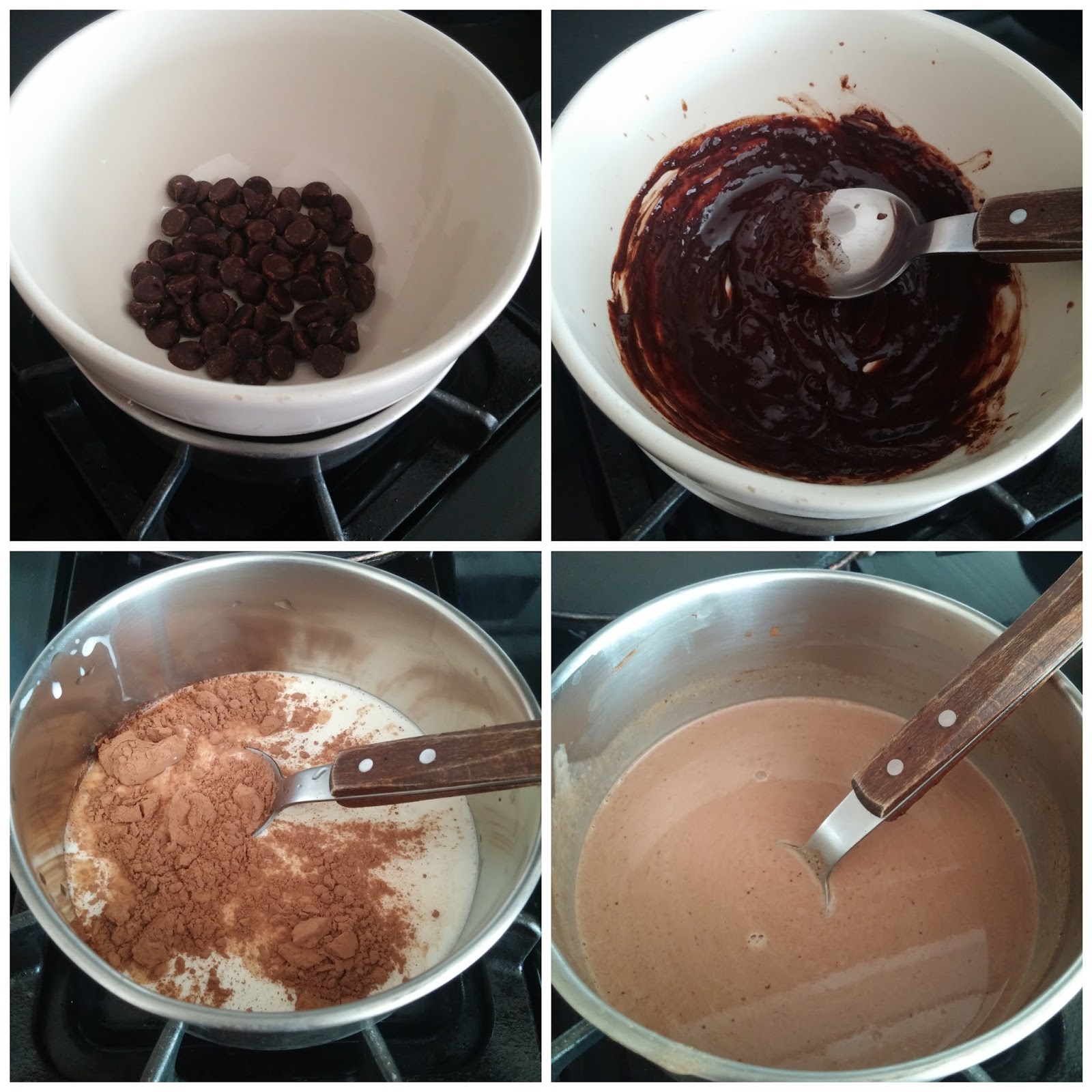 5) Once cooled, chill the mixture in the refrigerator for 30- 45 mins.

7) Now with a hand mixer beat the mixture on high speed for 5 - 10 mins. Cover it with cling wrap and keep it in the freezer along with the ice bath for 1 hr. (You can also use a whisk but you may have to whisk it for at least 15 mins....that will be a good workout for your arms. :P)

8) After an hour remove and repeat the same procedure. Beat the mixture on high speed for 10 mins.
I repeated this procedure 3 times within an interval of 45 mins to 1 hour. 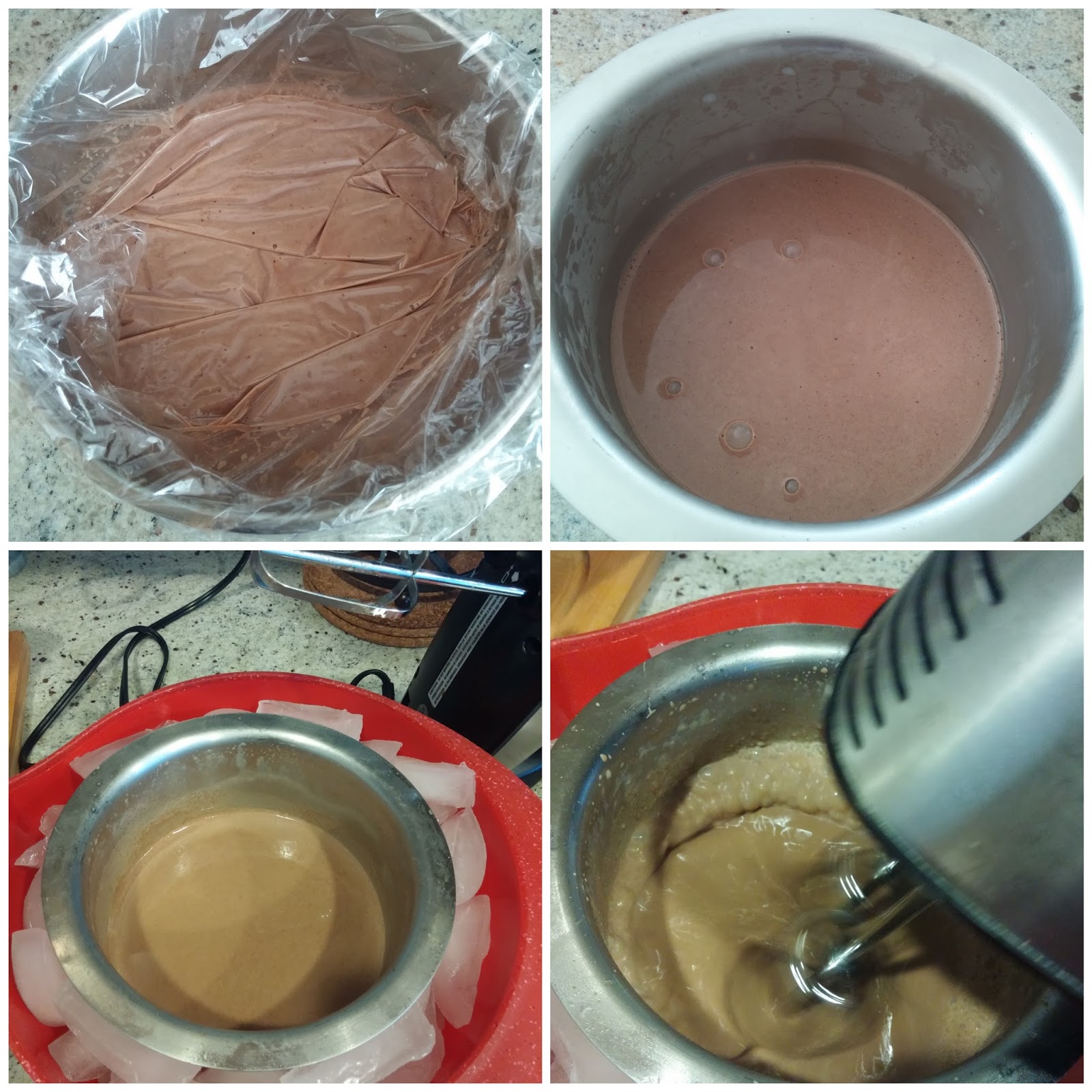 9) Now when you beat the mixture for the third and the last time, the consistency will be like a soft serve. 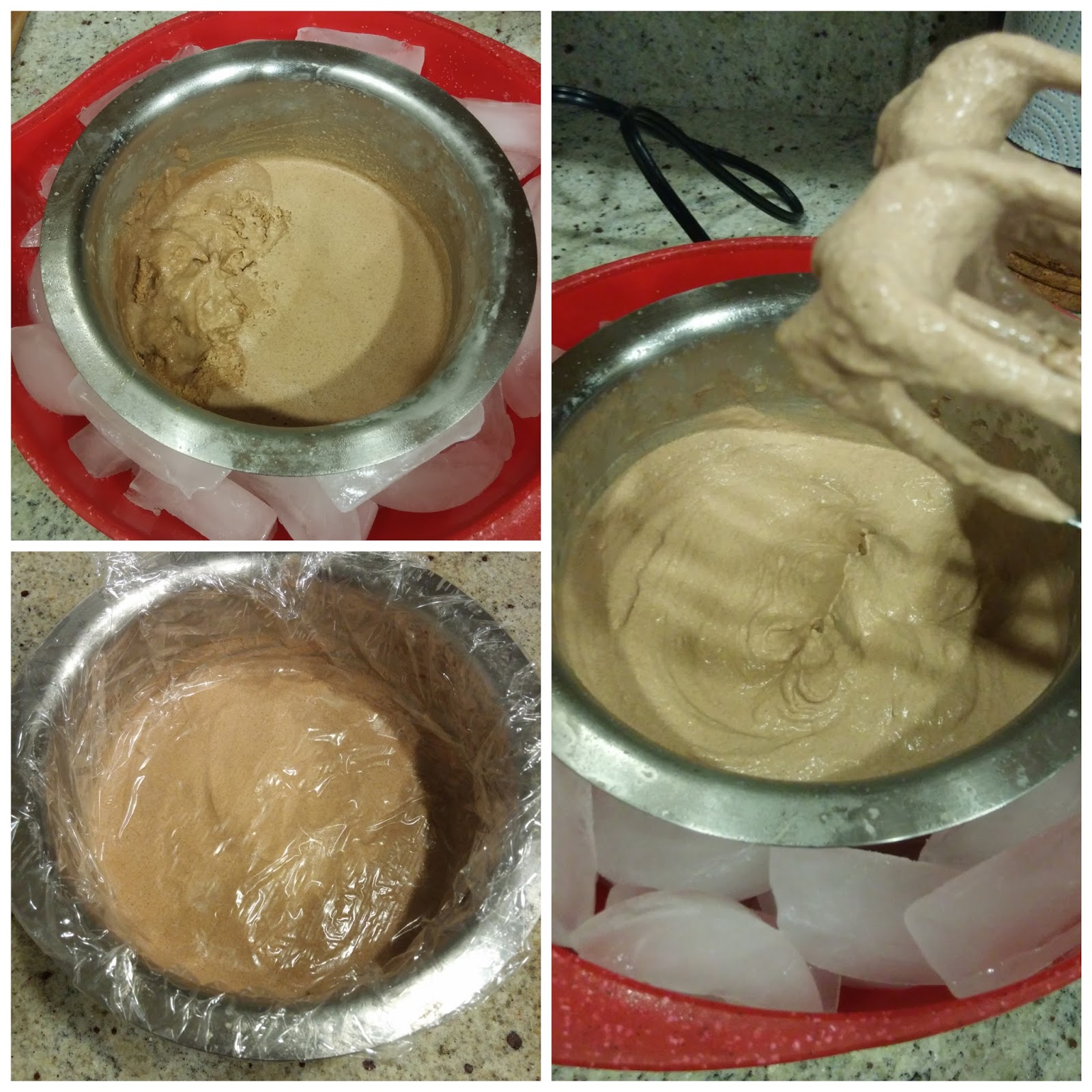 10) Finally cover it again with the cling wrap and freeze it (no ice bath needed at the end) overnight or until it is set. Serve chilled with you favorite toppings. 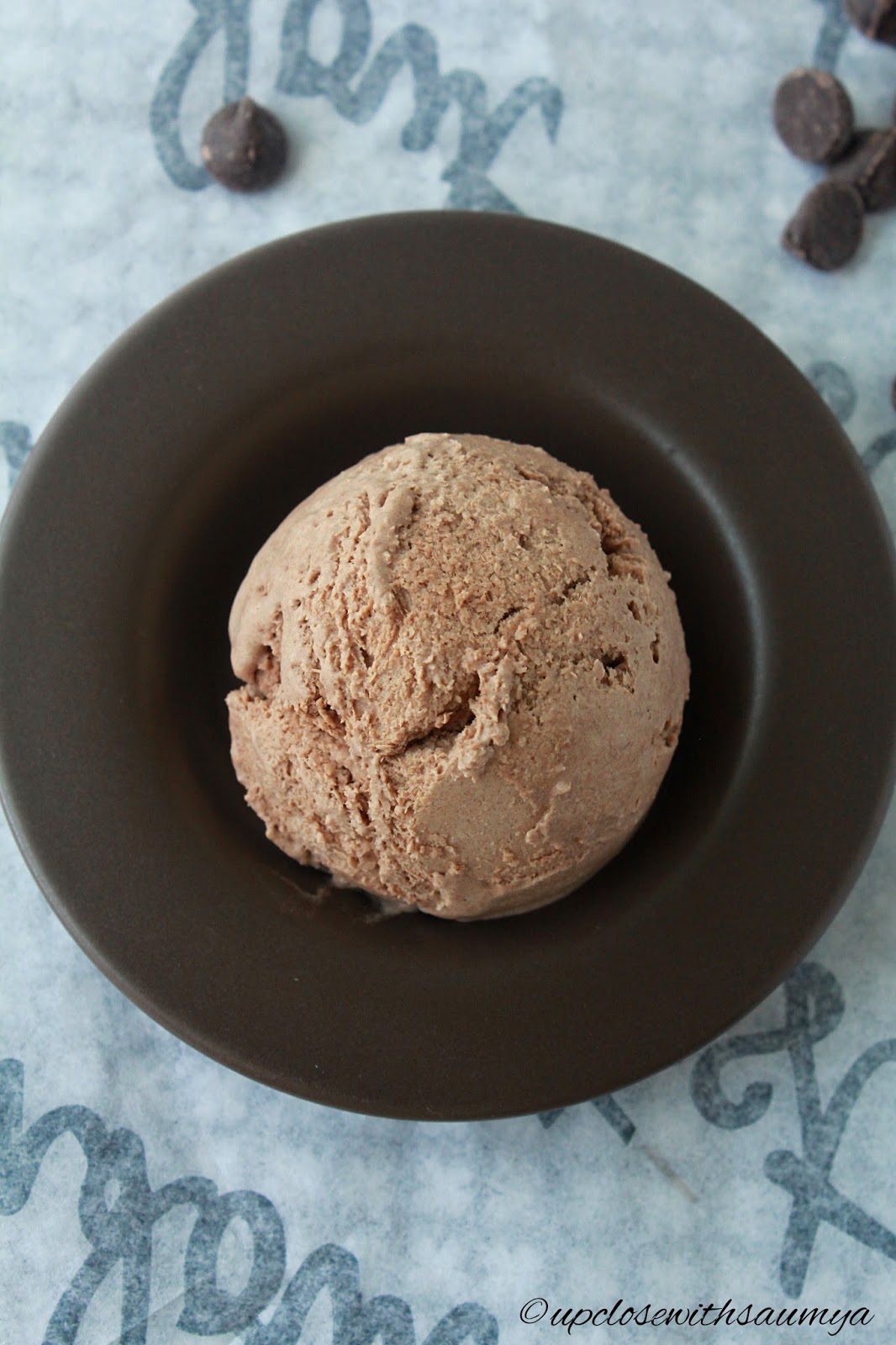 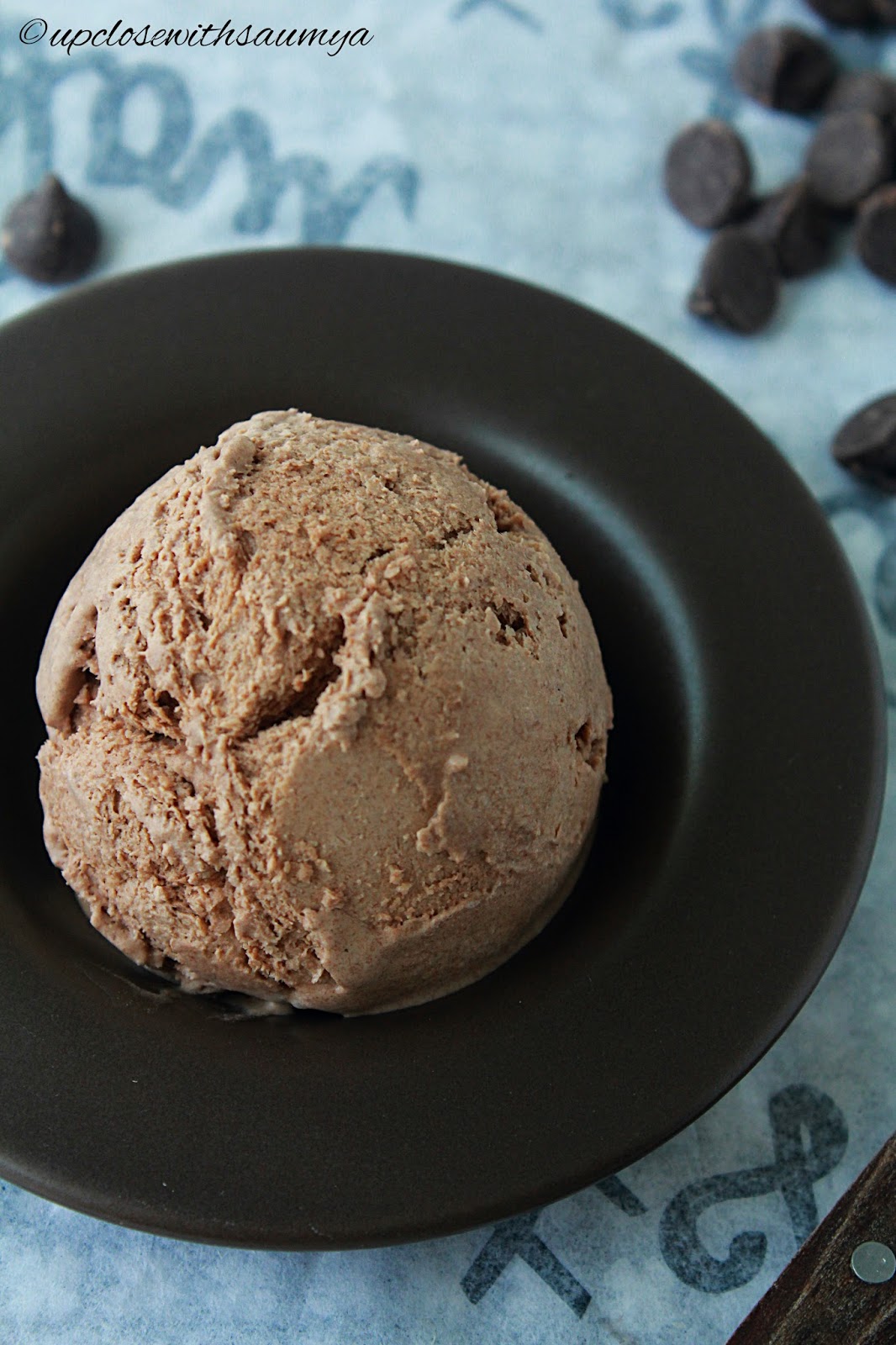